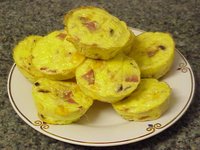 I've been intrigued by this recipe for quite some time. There was some Canadian Bacon that had to be used up so I thought it would be a great time to make: Kalyn's Egg "Muffins". 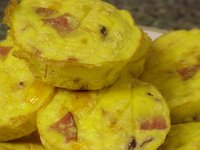 When shopping one day, I happened to find silicon cupcake pans that were actually on sale. There was no issue of them being released from baking. Kalyn had mentioned in a later post about theese muffins that she wouldn't make them in any other type pan.

I mixed in a chopped scallion and chopped candian bacon and some grated cheddar and Asiago cheeses along with salt and pepper and they came out Eggalicious!!!! And it's great for a Low-Carb Diet! :-) Thanks Kalyn!!
Posted by Tony's Food Chronicles at 11:46 AM